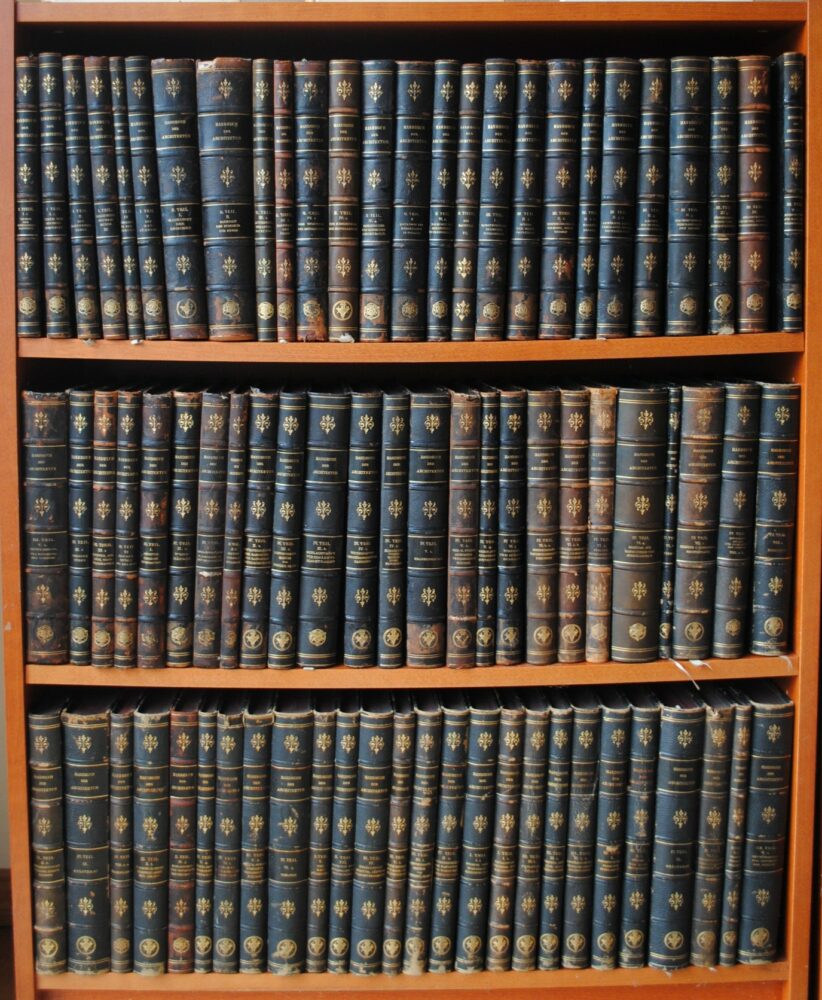 64 (of ?) volumes (some volumes besides the first also presented in the strongly extended 2nd edition) published until 1922.

„The Handbuch der Architektur was perhaps one of the most ambitious publishing projects ever. It attempted nothing less than a full account of all architectural knowledge available at the time, both past and present. It covers topics from Greek temples to contemporary hospitals and universities; from design of individual constructions elements such as window stills to large-scale town planning; from physics to design, from planning to construction. It also discusses architectural history and styles and a multitude of other topics, such as building conception, statics, and interior design.

Not surprisingly, this project took longer than planned. The first volume was partly published in 1880, and over the next 63 years more than 100 architetcs worked on what would become more than 140 individual publications with over 25,000 total pages. Somewhat tragically, the encyclopedia was quickly forgotten after its completion. The complete set is now available in only a few libraries. It is worthwhile to revisit this comprehensive encyclopedia, not only for historical reasons but also because much of the stored knowledge is still valid even by today´s standards. For architects working in restoration, it can provide first-hand knowledge of the construction of an old building.” Published by the IBEE Computer Society 2010. René Witte, Ralf Krestel, Thomas Kappler, Peter C. Lockemann.

The intention of the architects and scholars who launched in – Eduard Schmitt (1842–1913) and Heinrich Wagner (1834–1897) in Darmstadt, Josef Durm (1837–1919) from Karlsruhe, Hermann Ende (1829–1907) from Berlin – was to cover the subject in its entirety by a series of separate monographs arranged into four principal groupings with their own internal subdivisions. The numbering system for each volume that results is a complicated one, but the fact that a volume may be described as ‘Heft 1’ of ‘Halband 5’ of the ‘Vierther Theil’ of the ‘Handbuch’ should not detract from its usefulness as an individual monograph – this particular volume is the excellent one on hospitals by Oswald Kuhn. Most volumes also have a helpful bibliographical section or sections.

I will be pleased to send you a detailed list of the individual volumes on request.